Congratulations to all the Winners!

To see all the judges' comments and the presentation slides, click here

See the replay of the livestreamed ceremony on SOPA's YouTube Channel 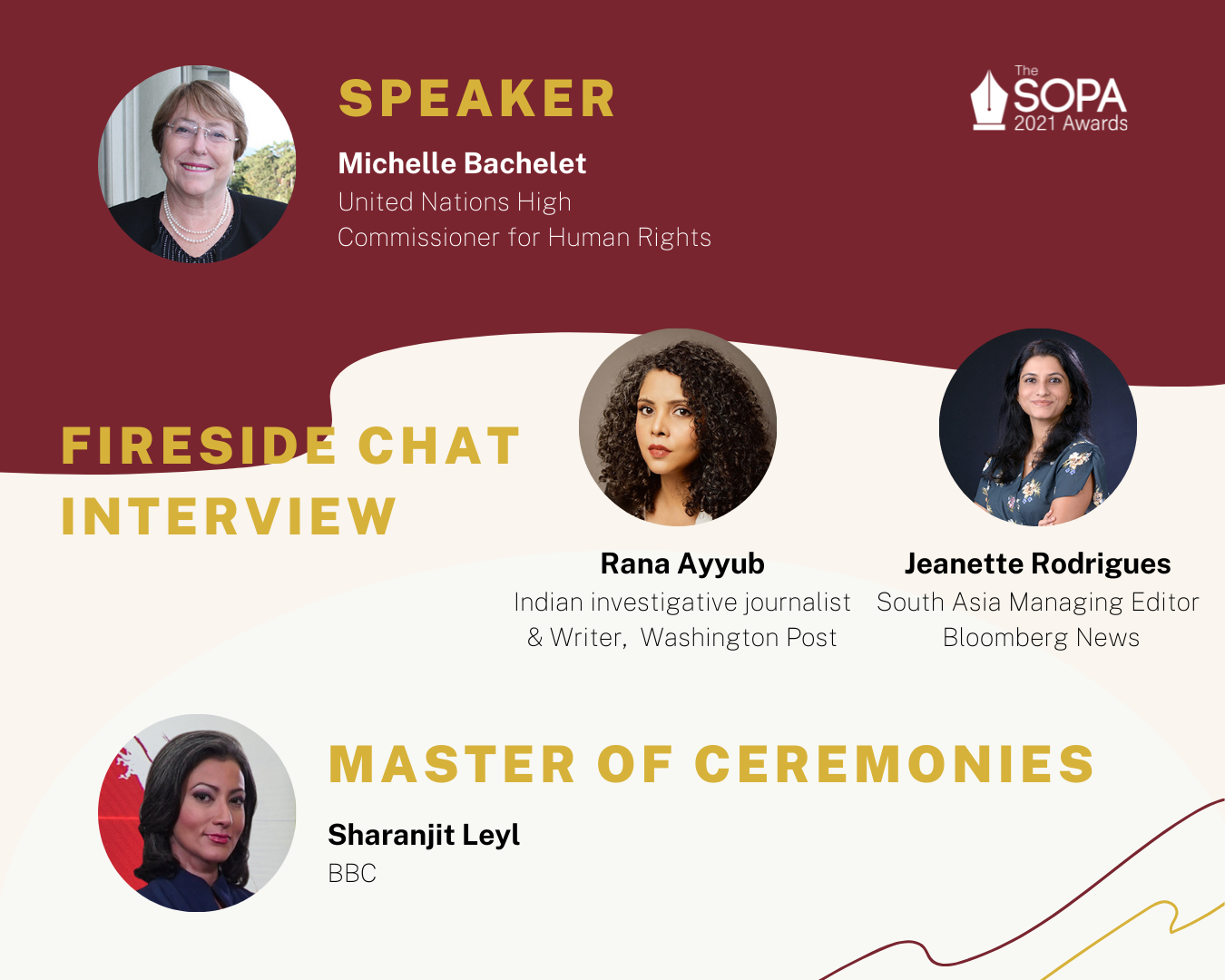 The finalists and the winners for the SOPA 2021 Awards for Editorial Excellence have been announced.

International, regional and local media outlets from around the world submitted more than 760 entries in English and Chinese to the award.

The awards this year featured 18 categories, including the new SOPA Award for Young Journalists.

The entries were judged by a panel comprising industry professionals from the region’s most influential media organisations, leading journalism schools, and past award winners.

The Society of Publishers in Asia was founded in Hong Kong in 1982 to encourage best practices in the publishing industry, set a high bar for journalistic standards and be a voice for press freedom and journalists' rights in Asia-Pacific.

As part of that mandate, SOPA established the annual SOPA Awards for Editorial Excellence in 1999 to recognize and reward great journalism. The annual awards are highly coveted and have become a highlight of the regional media calendar.

SOPA's Editorial Committee, composed of senior journalists, oversees the awards in coordination with SOPA's board of publisher representatives.  All members volunteer their time throughout the year leading up to the annual awards.

In 2011, the University of Hong Kong's Journalism & Media Studies Centre was appointed to administer the awards,including recruiting distinguished former or current journalists and academics from around the world to be judges. Each year, those judges donate their time and make sure editorial standards are upheld.

More than 90 awards are given out each year in an array of categories. The categories are periodically reviewed to keep pace with the ever-evolving ways that journalism is delivered to consumers. Video Reporting and Journalistic Innovation were added to the lineup beginning with the 2017 awards, reflecting the increasing role of visual effects and multimedia platforms in story-telling. In 2018, the SOPA Award for Public Service Journalism replaced the category of Journalist of the Year. That award honors outstanding work by both individuals and teams that represents an exemplary contribution to public service in the region. And for the 2021 Awards, the category of Young Journalist of the Year was added in recognition of the challenging world the next generation of journalists faces.

The SOPA Awards are open to digital and print publications in English and Chinese.

Why Enter The SOPA Awards?

The SOPA Awards have served as recognition of the region’s most outstanding journalists and publishers while supporting and defending a free press in Asia. Brands are judged by the company they keep, and every year SOPA Awards draw hundreds of entries from top-class successful media brands doing business in Asia. Don’t miss the chance to enhance your reputation for quality journalism that attracts influential readers and a broader base of advertisers

As a not-for-profit organization, sponsorship is key to ensuring the vitality of the annual SOPA Awards. Over the years, SOPA has been fortunate in receiving strong support from its sponsors. Please contact [email protected] for more information on how to support the SOPA Awards.